Your computer is being blocked by Luxembourg Police Ukash Virus and you have to pay €100 fine to unlock it via Ukash or Paysafecard?

Luxembourg Police Ukash Virus is the new variant of the infamous Ukash virus family. Luxembourg Police Cybercriminailite Departement Virus  is fake police virus and it acts as a successor to attack Windows computers especially for Luxemburg. This is a type of computer virus infection that makes use of  fake warning message about the local police and desktop lockup for cheating fines. The Luxembourg Police Virus is using  Trojan tactics to report your IP address referring to illegal online activities include improper content view and claims to fine you money by filling Ukash or Paysafecard.

Its contents start with “From this IP address it was visited sites containing banned scenes of violence against people, as well as viewing banned in the Luxembourg child pornographic materials.” I was watching a movie, and from nowhere i got my pc blocked, i’ve read its a scam but i want to get rid of it. Victims are surprised to read this fake police alert for they haven’t really done so called illegal activities. There is also scary information: “The computer has been locked to prevent your illegal activities on the Internet. To unlock the computer you are obliged, within 48 hours of receiving this notice, to pay a fine of 100 Euro”. It looks like making sense to be fined and has desktop locked if there are real illegal activities found by police. But even if you paid the amount of money by Ukash, your computer still be locked up by hackers. So the only best way to save your computer is manually remove Luxembourg Police Ukash Virus and unlock your laptop/desktop with expertise. 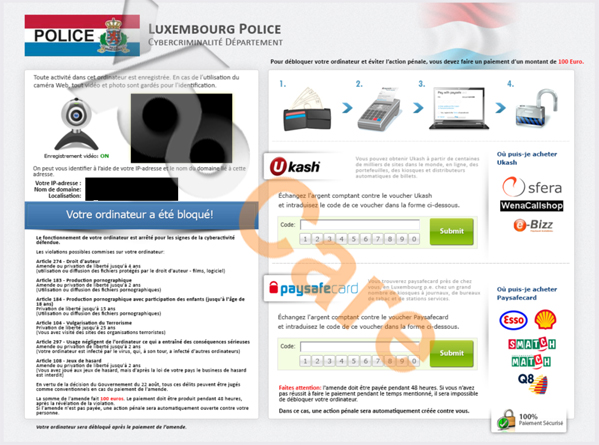 1. To unlock your computer you are obliged to pay a fine of 100 euro within 48 hours.
2. The fine must be paid with the help of Ukash or Paysafecard system.
3. To pay the fine you should enter digital code which is located on the back of your Ukash or Paysafecard in the payment form and press OK (if you have several codes, enter them one after the other and press OK).

I have got the ukash virus on my computer when i was trying to watch live cricket, it has locked my computer and is asking for payment of euros 100. What to do if you get caught in a Luxembourg Police Ukash Virus?  YooCare experts can plan out a solution to access your computer in safe mode with networking at first. When it’s possible to do that, their experts will do as follows:

Step B: Press Ctrl+Alt+Del keys to open the Task manager to stop the progress of Luxembourg Police Ukash Virus. Because the name will be changed fast, it will be show with different name.

By the way: Woke up to find out Luxembourg Police Ukash Virus screen saying to pay a fine of 200 dollars within 48 hours? I don’t think it’s legit or is it? It is fake. Manually remove Luxembourg Police Virus is a rather difficult work, if you are not a professional computer expert. We recommend you to get YooCare online service 24/7 in time. This is the real fastest and safe way to remove it.

NOTE: This is a horrible Ukash virus that locked your computer asking for 100 euro payment. Never fall for “Luxembourg Police Ukash Virus Fake warning message screen”, it just means your Windows XP, Windows Vista or Windows 7 has suffered the “Police Ukash virus” which hijacks your computer and blocks you to do anything  to unlock your CPU. Since the Luxembourg Police Ukash Virus has taken over your screen and it really can lock up the desktop, since no anti-virus software can handle this nasty virus. So, the best way to make it gone completely is to get help from computer experts who can help you safely and quickly.

Special tips: Spending a lot of time fixing your computer with no success and don’t want to make things worse? Contact experts now to unlock your computer and remove Luxembourg Police Ukash Virus safely and completely.