XP Security 2013 firewall alert warning Virus is defined as a dangerous fake anti-virus program by YooSecurity Labs. It is very similar to Win 7 Defender 2013 fake alert. Windows XP Security 2013 is a rogue anti-virus program that has been developed to damage computer systems running in Windows XP. And it is also a dangerous fake virus removal tool which is installed via Trojans that display false error messages and security warnings on the infected computer. It bares the same tactics as other fake AVs by hijacking your system and displaying many misleading pop-ups. When you click on of these fake alerts, XP Security 2013 virus will automatically be downloaded and installed onto your computer without your permission. It acts like a bandit to force you to lose control with your PC. It is really annoying that does intentional damage to your computer hardware or software. Actually, it hide beyond the code of legitimate programs—programs that have been infected, that is. When the host program is launched, it will state that a critical error has occurred while indexing data stored on hard drive. XP Security 2013 firewall alert virus tries to tell you thereby that a fair amount of adware, spyware, keyloggers and viruses are on your computer, endangering its further functioning prospects. And you need to purchase it is activation code to register for its full version so that you can clean all threats it detected. But it is big scam that must be removed immediately. 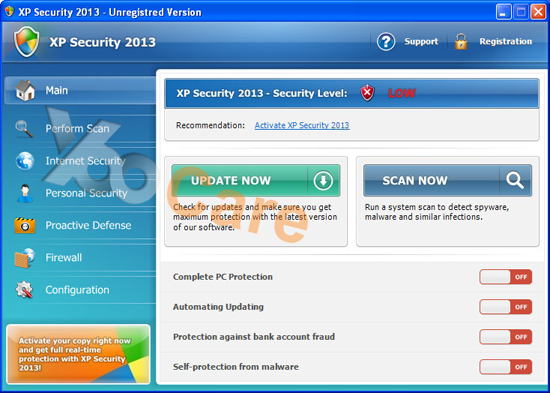 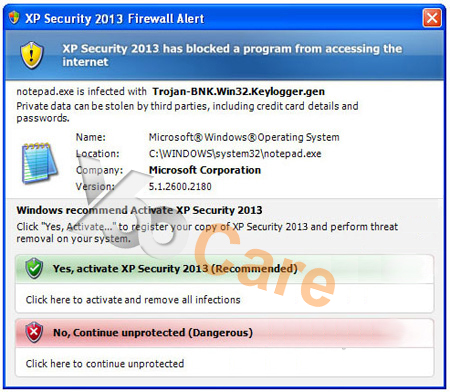 How Do You Know If Your Computer has been effected by XP Security 2013 Virus.

How did I get XP Security 2013 virus thing? Specifically, when a user visits some sites that look like legitimate, but all of a sudden there is a pop-up dialog box warning the user that his computer has been poisoned, and then he or her get provided with security software for downloading. Once clicked on that thing then the fake alert starts to scan. Do you know what will happen after it finished the scan? Yes, XP Security 2013 virus will show you a fictitious scan result. It will alert you there are many critical system problems on your computer. Windows XP Security 2013 rogue virus program uses scare tactics to convince users that their computers are infected with tons of viruses, worms, trojan horses. Although, it may look like legitimate security software, it’s actually a big scam. If you suspect or confirm that your computer is infected with this fake AV. Please take an action to uninstall the fake alert absolutely from your laptop or desktop.

1.Your system becomes a target for spam and bulky, intruding ads.
2. Browser crashes frequently and web access speed decreases.
3. Your personal files, photos, documents and passwords get stolen.
4. Your computer is used for criminal activity behind your back.
5. Bank details and credit card information gets disclosed.

What is The Best and Easiest Way to Uninstall Windows XP Security 2013 Virus?

XP Security 2013 is not only a fake antispyware program but it is a stupid thing and the rogue thing can help nothing but mess up your personal files, documents, folders. What XP Security 2013 firewall alert admittedly reports the threats you do not have for real. In addition, the fraud tool says your system has some errors and other suchlike problems that need to be addressed without delaying.. But there are several things you can do before receiving helps from experts.
– Stop some processes of XP Security 2013 virus from running from the Windows Task Manager.
– Do not download unauthorized antivirus programs and try to remove it as you may be exposed to the risks of losing data or system crashing.
– Do not open any links or ads that pop up since you could only be infected with more viruses.
But if you don’t feel confident to solve the problems alone and there’s no friends with enough knowledge around to help you at the moment, it is strongly recommended that you go for helps from PC experts who can help you safely remove XP Security 2013 virus. 4. Search for all related registry entries infected by XP Security 2013 virus and wipe them out:

To sum up, you should learn more about XP Security 2013 virus after reading the above content. Do you understand how to remove it now? Perhaps no, but at least you should realize how dangerous it is. Sometimes, XP Security 2013 rogue program may block your antivirus and antispyware programs, that is why there is not a good virus removal tool to help you fix the nasty virus, and you will need to remove the warning virus manually. If you noticed that your computer was infected with Security 2013 virus, please follow the manual removal instructions above to permanently get rid of it from your computer at a quick time.  Generally speaking, manual removal is a complex and risky process, so please consult YooCare PC experts 24/7 online to help you uninstall the fake XP Security 2013 virus from your computer completely.

Note: If you found it difficult to follow the removal guide above, please contact YooCare PC experts 24/7 online will help you remove XP Security 2013 Virus from your computer completely.